The Scottish Pagan Federation have finally won our twenty-year battle to have Paganism included in the National Census for Scotland. This is a massive victory for Scottish Paganism in terms of rights and recognition. This victory comes off the back of several years of very hard work by the Scottish Pagan Federation in ensuring that all National Census Stake-holder meetings had delegations of our officers in attendance, to show strength in numbers, and to highlight there were Pagans in every Scottish city they consulted all pushing for this. This success also follows on the back of our comprehensive letter writing campaign calling on the Scottish Pagan Community’s support in petitioning Scottish MPs and Scottish MSPs, urging the Scottish Government to do everything within their power to support this change. We are very proud of our wonderful Pagan community for their support.

For over two decades the Scottish Pagan Federation have made it one of our Primary Campaigns to get a Pagan tick-box into the Scottish Census. Having a Pagan tick-box has two important factors: it increases our visibility as a faith community and it ensures our number are accurately captured. The importance of being recognised in the census figures will go a long way to improving Pagan rights and recognition in a number of areas including in education, the NHS, local authorities. It is incredibly important for our true numbers to be captured, as it gives us a stronger case for provision. The Government, local authorities and many other agencies use the Census results when allocating provisions for the different faith communities in Scotland, of which Paganism is one, so it is essential that our true numbers are reflected. Having our true numbers reflected also helps reduce prejudice and misinformation on Scottish Paganism, and allows us to push for more rights as a faith community. Being able to demonstrate that we are a significant and rapidly growing faith community in modern Scotland has greatly helped us in securing recognition and countering discrimination since 2001. 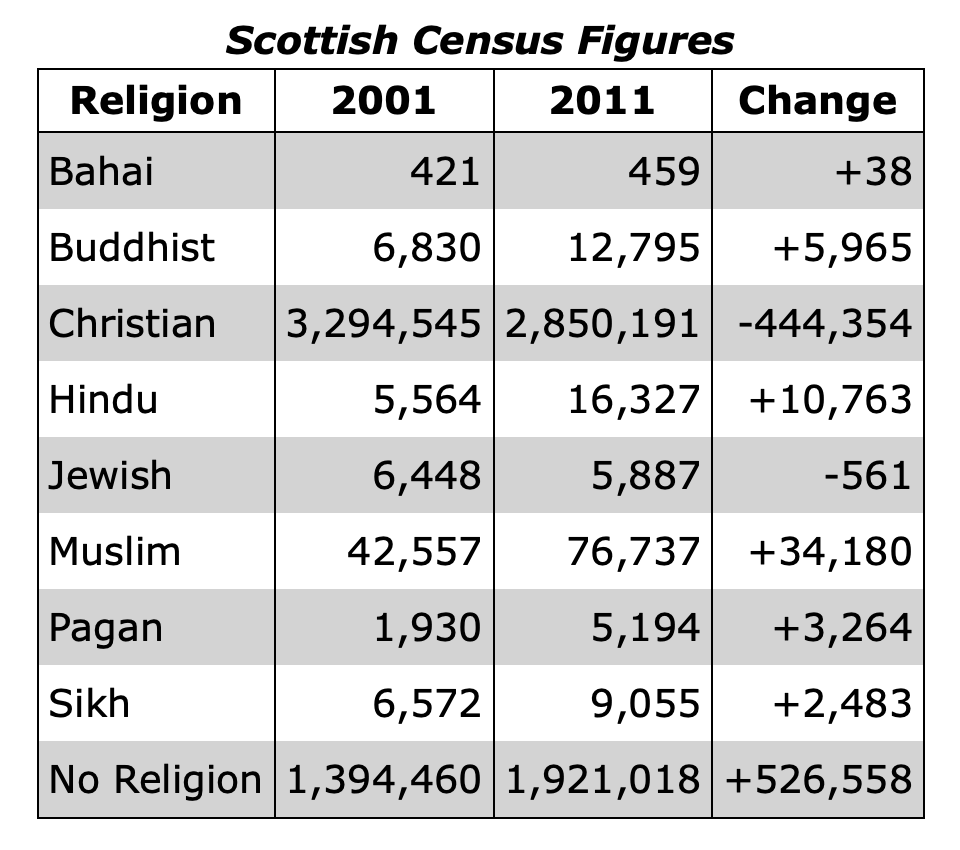 The Scottish Census 2011 clearly established Paganism as the sixth largest non-Christian religion here in Scotland. This also established us as one of the fastest growing religions in modern Scotland, with our numbers almost trebling in a decade. In the 2001 Scottish Census we polled 1,930 Pagans, while in the 2011 Scottish Census we polled 5,194 pagans, a figure comparable with the Jewish Community in Scotland. This parallel is important, as while there are Jewish schools here in modern Scotland, there is currently no provision for Paganism even within the Religious Education Curriculum for Scottish Schoolchildren. This result will also ensure we have a stronger case for Paganism to be included in religious education curriculum within schools and have more recognition in interfaith and university chaplaincy. On top of this, experts believe the number of Pagans here in Scotland is significantly higher than currently being reported, with figures quoted as being closer to 30,000.

Up until now, with the lack of their own tick-box, Scottish Pagans have had to write their faith in the ‘Other’ box. We know from consultations within our own faith community that many Pagans were still too nervous to do this, given the prejudice many Pagans have faced in past generations. Those attitudes are softening, which may reflect the large jump in numbers between 2001 and 2011, as more and more feel confident to self-identify with each passing decade. We hope this victory will go a great length to alleviating those tensions.

This victory has not been easy. We started this campaign back in 2001 when the General Register Office for Scotland was unable to make the census results for Pagans freely available. This led to the Scottish PF lobbying ministers, petitioning parliament, and finally raising enough money to have the information released, so we could conduct a detailed analysis. Our findings revealed that 1,930 people had identified themselves as Pagan but we knew this didn’t reflect the true number of Pagans in Scotland. This led to a ten-year Campaign to have Paganism included in the next Census of 2011. We were almost there at that point, however our inclusion was knocked out at the last hurdle by one MSP who voted critically against us to make more room for Christian denominations. Something Pagans in Scotland will not easily forget. However, that Campaign did raise awareness of this issue, and helped galvanise the Scottish Pagan Community towards this victory we celebrate today.

In Scotland, Pagans today still continue to make history, push boundaries, and lead by example. This year we also had a Scottish Pagan, one of our officers, become the first LGBTQ+ University Chaplain in the UK. We had the first legal Pagan same-sex marriage conducted in Orkney as our Celebrancy Team continues to grow, with now more Pagan Weddings here in Scotland than weddings by the Mormon and Jewish communities. We are working on a prominent Pagan Faith Display with the Curator of Saint Mungo’s Museum of Religious Life, a display will help normalise Paganism for the next generations of Scottish Schoolchildren. We are also just about to launch one of the largest Surveys ever conducted looking into modern discrimination against Paganism in the UK and also across Europe. 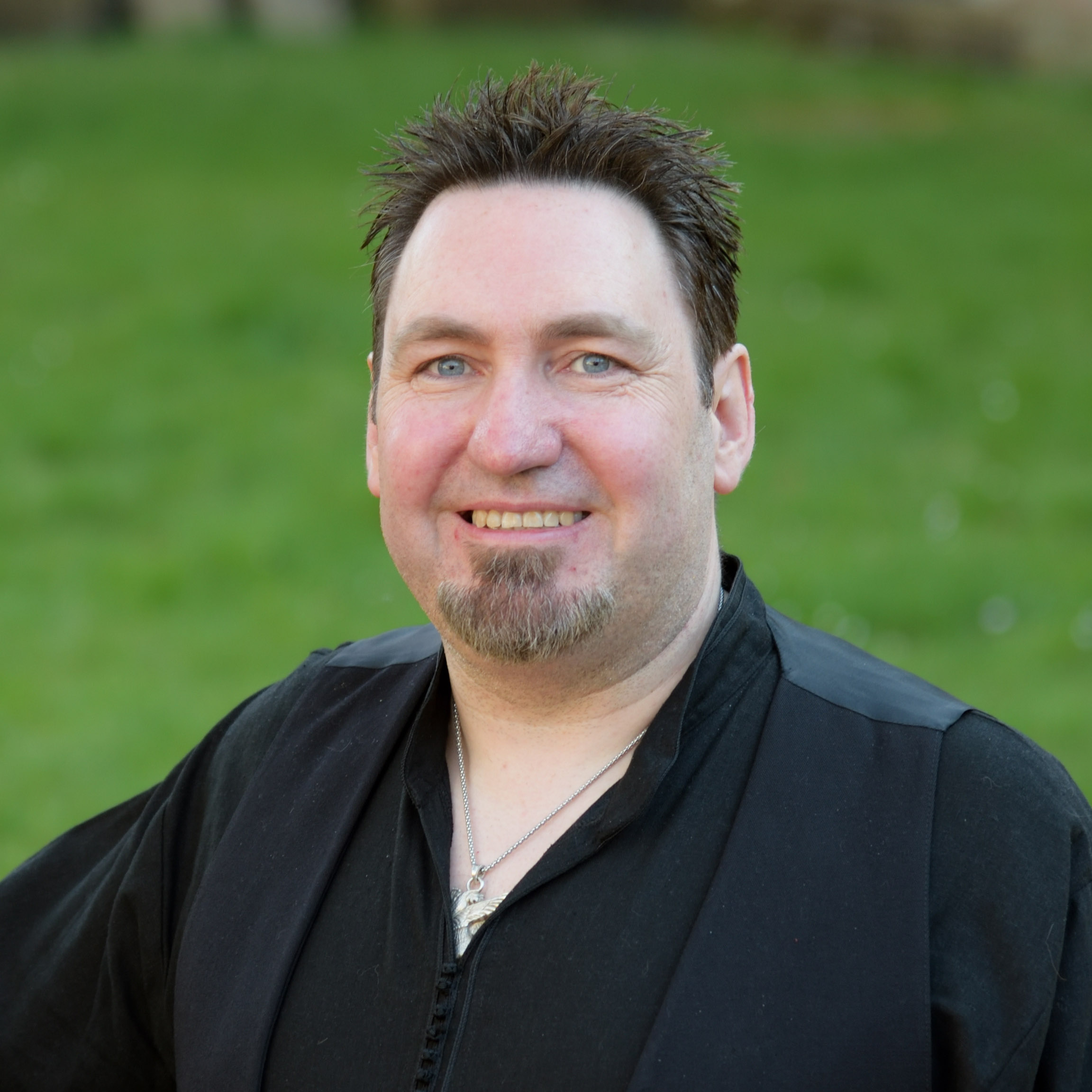